Kissimmee Prairie Preserve appears above, an excellent amateur astronomer friendly Florida dark sky site (just noting that it's not in Kissimmee Florida, but SouthWest of Yeehaw Junction.)
​See the stars in the sky at Kissimmee Prairie Preserve State Park
MAP OF DARK SKY OBSERVING SITES THAT THE PUBLIC CAN OFTEN USE​
​(& FLORIDA UNIVERSITY OBSERVATORY LOCATIONS)
The blue telescope icon indicates a relatively darker-than-urban sky observing location. (to add one, e-mail reachjasonh@ and add gmail.com to it.)
The image below is cropped from an image featured in a 2016 science paper The New World Atlas of Artificial Night Sky Brightness.  White represents the brightest light pollution areas, blue the darkest skies. 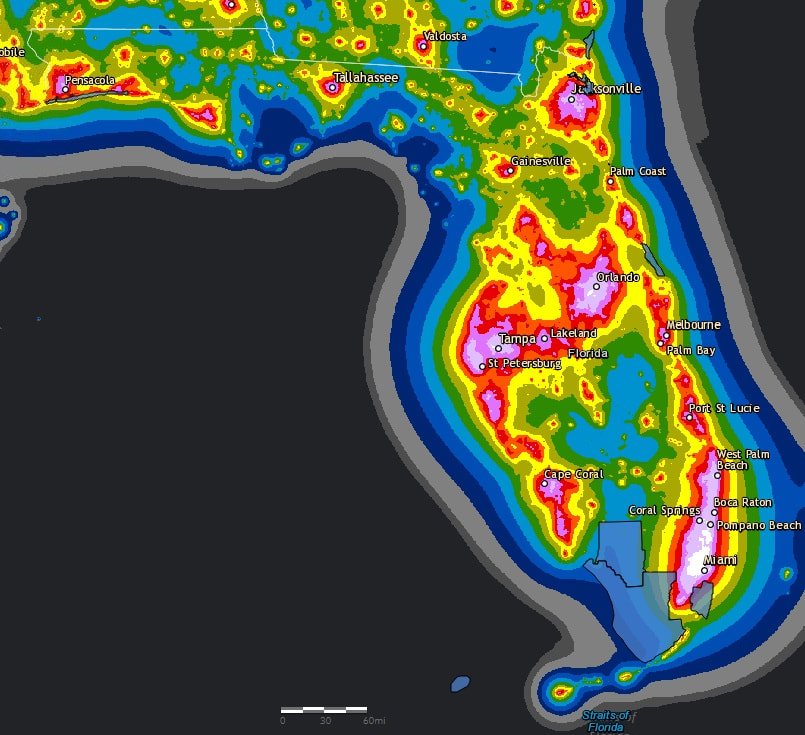 NEW LINK UPDATED 23 SEPT. 2021 - This map is based on data published June 10, 2016 by a team of researchers led by Fabio Falchi and including NOAA's Chris Elvidge and CIRES' Kimberly Baugh. Image is available via Creative Commons License http://creativecommons.org/licenses/by-nc/4.0 Image credit: F. Falchi et al., Light Pollution Atlas, ISTIL Also credit Jakob Grothe/NPS contractor, and Matthew Price/CIRES, who also worked on the zoomable version of this that can be found at http://cires.colorado.edu/Artificial-light (which you can go to by clicking the image.)
​THIS FLORIDA LIGHT POLLUTION/DARK SKY MAP IS A MOSAIC FROM 2016 NASA/NOAA SUOMI/NPP SATELLITE IMAGES The images below compare the two images at https://earthobservatory.nasa.gov/features/NightLights/page3.php .  I made this animation, and I suspect that perhaps the original images are not calibrated to each other, so there could be some variability in the sensitivity shown? (so we can't trust that these are apples-to-apples images with regard to sensitivity.) That said, although many new light sources do show up, there are some that appear to go away.  Maybe there's still room for hope of improving the situation?

Below is an March 29, 2022 image from NASA's EODIS WORLDVIEW which also uses NASA/Suomi-NPP-VIIRS data which shows lights of various spectra, it basically shows sources of light on the ground. 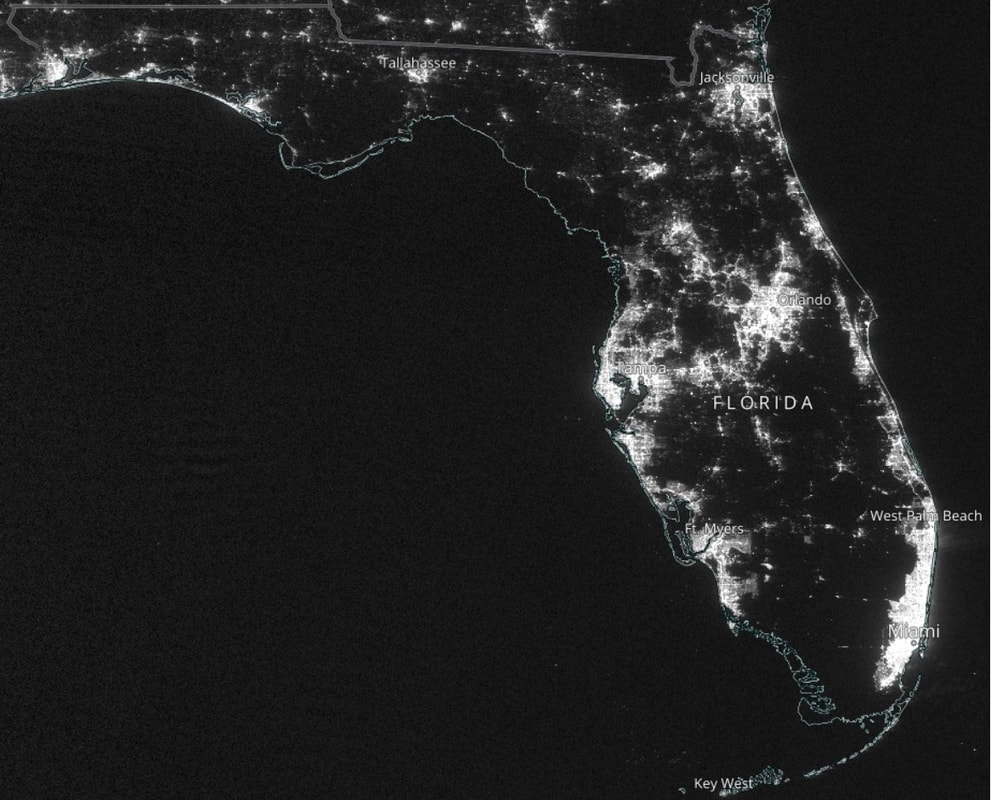 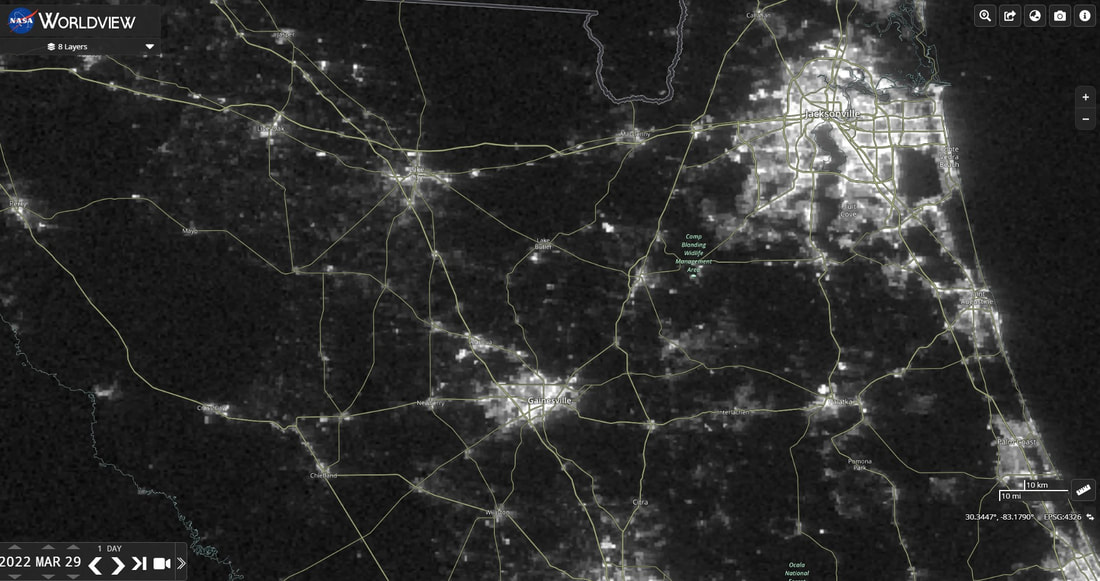 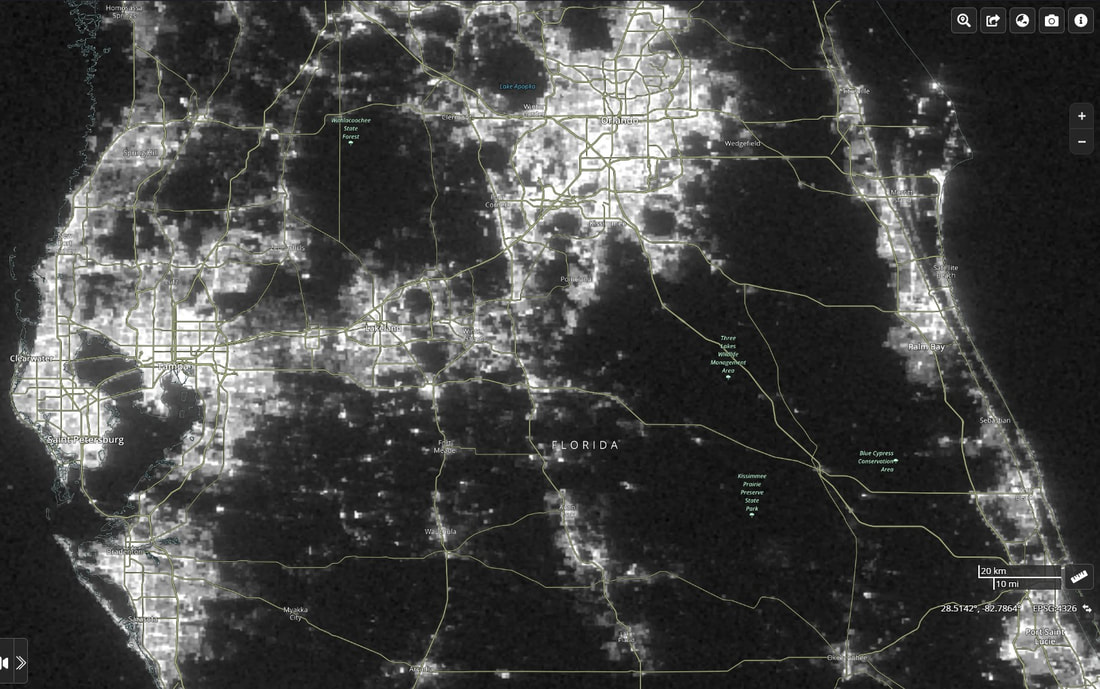 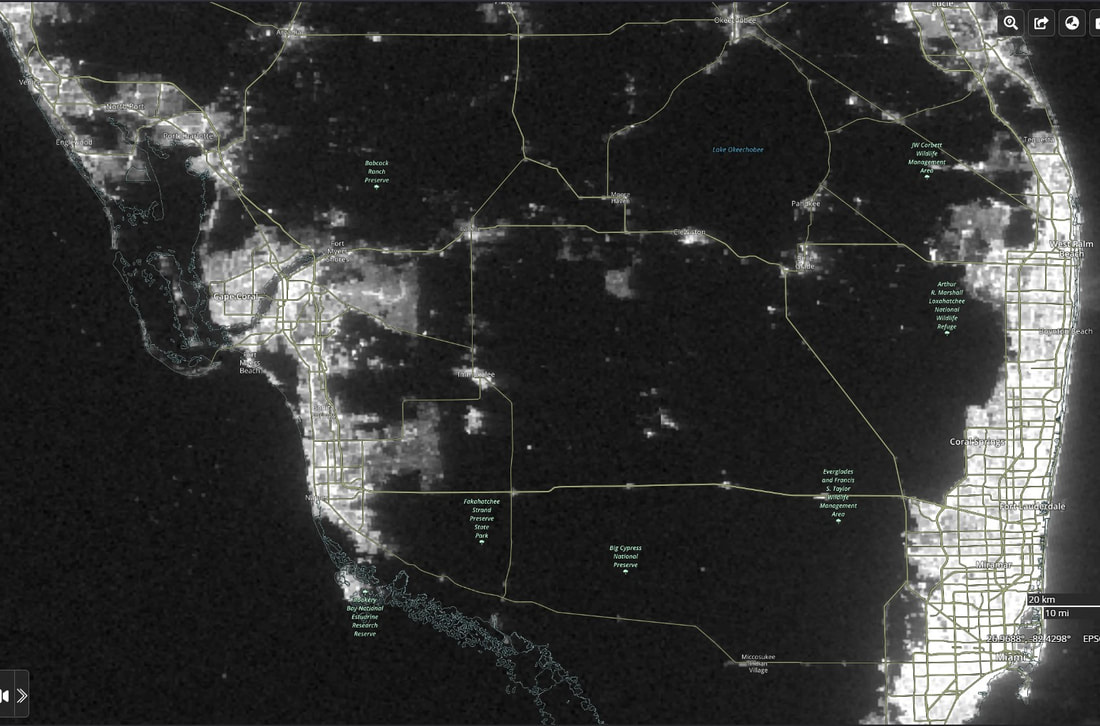 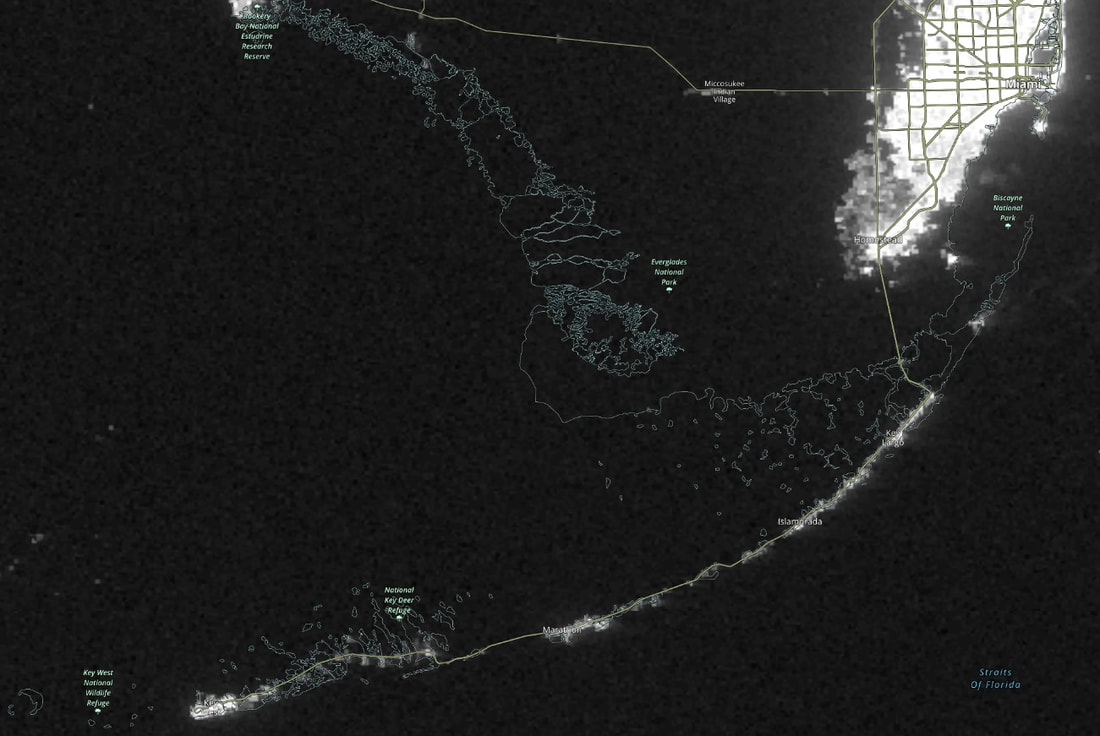 THE MILKY WAY AS SEEN FROM A DARK SKY SITE USING ONLY A DSLR CAMERA, ONE 98 SECOND EXPOSURE, ON A TELESCOPE MOUNT. 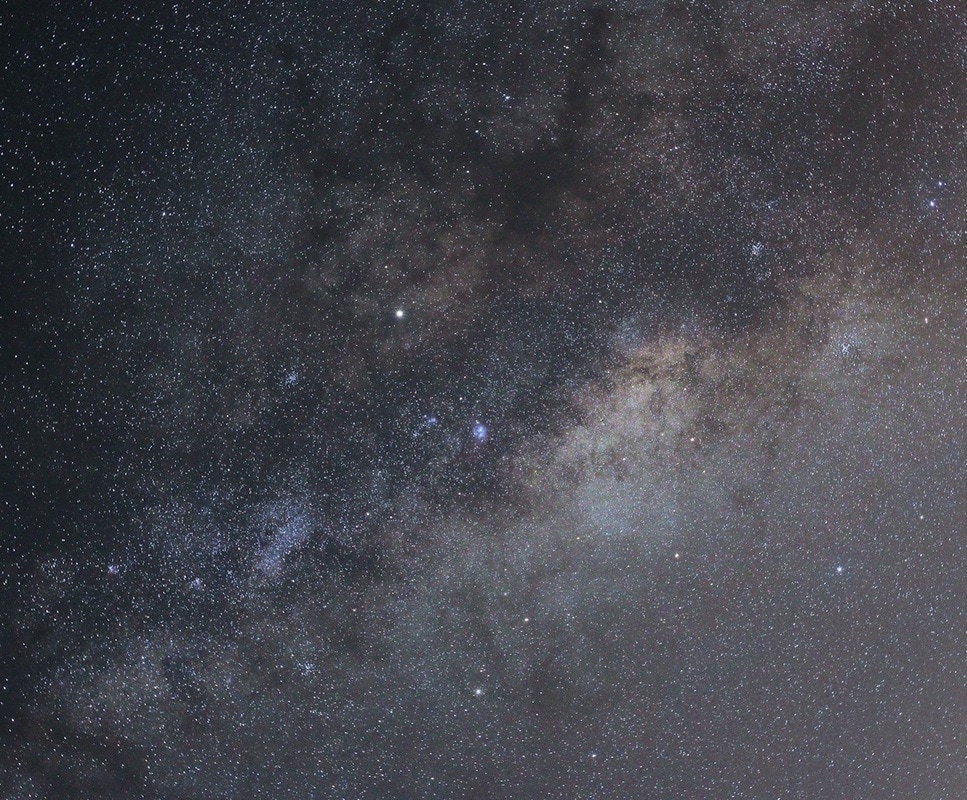 The image above of the Milky Way from a dark sky site in Florida, just south of Yeehaw Junction. It was acquired (with an astro-imagers help) just South of Yeehaw Junction Florida, in late March of 2017. The camera was on a mount, the camera was my Canon T6i and it's a single exposure of 98 seconds (I tried some stacks, but in this case the single exposure looked much cleaner.) I had to crop the original images a bit and deal with the light pollution gradient too (as it was still Spring, low to the horizon just before sunrise.) THIS LOCATION IS NOT FAR FROM KISSIMMEE PRAIRIE PRESERVE - The image is looking toward the center of our Milky Way Galaxy, no telescope was used (only a camera) with a telephoto lens on a sky tracking mount, in the morning hours in late March, 2017. It's not far from a publicly accessible state park campgrounds known as Kissimmee Prairie Preserve, a.k.a. "KPP"; amateurs like KPP because it is an astronomer-friendly site that many go to on weekends when the Moon is less visible, usually close to the New Moon phase.
WHEN VISITING REMOTE SITES YOU MAY ENCOUNTER WILDLIFE (INCLUDING APEX PREDATORS LIKE ALLIGATORS, BURMESE PYTHONS, PANTHERS, BLACK BEARS, COYOTES ETC.), HUNTERS, AND INTENSE INSECT ACTIVITY/DENSITY, AND YOU MAY WANT TO BRING A BUDDY AND/OR BE PREPARED FOR LEGAL SELF-PROTECTION, AND THAT THERE MAY NOT BE CELL PHONE SERVICE NOR BATHROOMS.
SOME KNOWN AMATEUR ASTRONOMY DARK SKY OBSERVING LOCATIONS 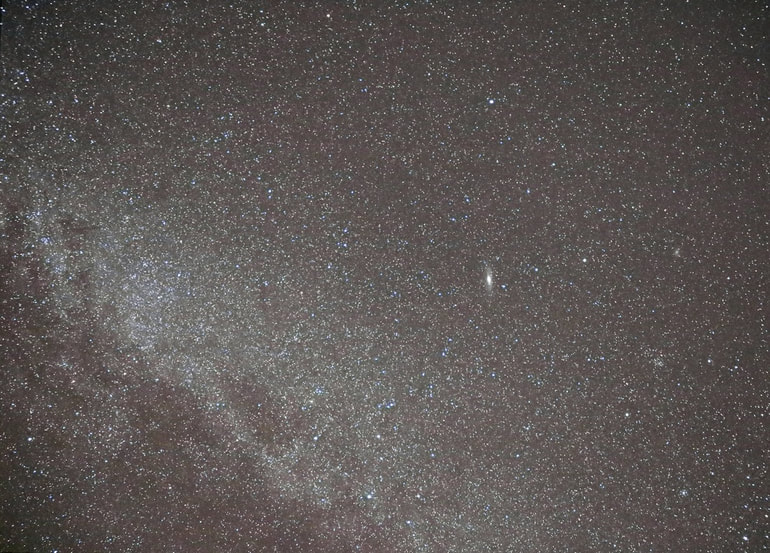 This image looking toward the Andromeda Galaxy (M31) also shows dust clouds from our own Milky Way galaxy backlit by the glow from millions of stars. I imaged it Oct. 22, 2016 from the Biolab Boat Ramp near Titusville, Florida. It is only six stacked 15 second exposures on a tripod-mounted DSLR.
(also see the Dark Sky Observing Sites map at the top of this page for the locations of the following dark sky sites)
NOTE: SOME U.S. FORESTRY SERVICE OPERATED LOCATIONS MAY REQUIRE PERMISSION BEFORE TRYING TO PARK OVER NIGHT, AND SOME LOCATIONS NO LONGER PERMIT DOING SO.

Biolab Boat Ramp Site near Canaveral National Seashore  - Get permission before observing at this site or visit during the KSCAA Public Star Party observing events (or you'll likely have a short session, as I once did :^).  This is a wonderful dark sky site from zenith Eastward (see image from there below), but when  'the transparency' forecast is not good light pollution from the West and Southwest may reflect off of clouds toward the site.

Chiefland Astronomy Village - Many neighbors team up at this location to provide one of Florida's most amateur astronomer friendly locations, and they host monthly star parties, and usually a major public star party in the Fall.

Fakahatchee Strand Reserve (a.k.a. 'The Fack'), off I-75 - touch base with someone at Everglades Astronomical Society.

Farles Prairie Recreation Area - within the Ocala National Forest. OVERNIGHT PARKING IS NO LONGER ALLOWED AT THIS LOCATION (DAYTIME USE ONLY AND A $5 FEE).  MAKE SURE TO GET PERMISSION FROM THE U.S. FORESTRY SERVICE BEFORE VISITING (last checked 25 April, 2022.)

​Kirby Storter Roadside Park - It's surrounded by the pristine Big Cypress Preserve.  Here's a google maps link that shows it clearly too.  See this 'street view' to see the site!!!
​
Kissimmee Prairie Preserve -not in Kissimmee, listed as a Silver Tier Dark Sky Site by the International Dark-Sky Association in 2016, it has astro observing sites too, check with them for info here
https://www.floridastateparks.org/parks-and-trails/kissimmee-prairie-preserve-state-park

Osceola National Forest site of NEFAS (open to all)

Withlacoochee River Park (county park with fees) - see http://www.stpeteastronomyclub.org/viewing.php for more info.
NASA Night Sky Network "How Can You Help Curb Light Pollution?"
YOU CAN HELP STOP THE SKY FROM BRIGHTENING BY ASKING YOUR LOCAL STREET LIGHTING PROVIDER TO STOP USING OVERLY BRIGHT LED FIXTURES (ESPECIALLY THE NEW LED LIGHTING REPLACING THE VERY NARROW BANDWIDTH ORANGE/RED SODIUM FIXTURES.)  AND ASK YOUR NEIGHBORS TO STOP POINTING HOUSE AND YARD LIGHTS AT THE SKY AND UPLIGHTING TREES.  NOT ONLY WILL THE NOCTURNAL CREATURES AND PLANT/TREES DO MUCH BETTER, AND US SLEEPING MUCH BETTER BE GREAT RESULTS, BUT WE WILL BE BETTER ABLE TO SEE THE AMAZING UNIVERSE THAT IS JUST OVER OUR HEADS, WITH JUST OUR EYES.
Powered by